What the World Eats- II

Somehow I missed this little fact, but this book says that in the year 2000 the World Watch Institute reported that for the first time there were just as many overfed people on the planet as there were underfed. This surprised me. Hunger organizations relentlessly show us videos and photos of starving adults and children— so naturally I believe that there are a lot of underfed people in the world.

Overfed people are not on my radar screen-- probably because they aren’t on TV or in movies because they aren’t considered beautiful enough for Hollywood. Personally, the only times I view the obese populace are when I attend a county fair and see chunky people waiting in line for corn dogs and funnel cakes; or when I am at a national park accosted by pudgy moms, dads, and children spilling out of their RV’s (and tight clothing) munching on bags of Cheetos.

Two dollars will barely buy a Happy Meal in America. Speaking of which, let’s see approximately how many McDonald’s are to be found world-wide:

Australia- 726 (kind of scary considering that there are what, about 5 big cities in Australia?)
China- over 600 (but China is so big and spread out you can't find them)
France- 973 (France isn't that much bigger than California)
Great Britain- 1,100 (gamely closely the gap on the Americans)
India- 46 (even though they can't serve beef)
Japan- 3,891 (I wonder if their fish sandwiches outsell their quarter pounders?)
United States- 13,491 (the big winner, er.. loser!)

It would be picking on America for me to post a photo of the poorest country in the book and compare it to a photo of one of the American families in the book. I’m here to tell you that the three American families represented here don’t stand out as being the only ones with big piles of food. You should see the photos of Great Britain (that family likes their biscuits), or Kuwait (that family likes their candy bars), or Australia (there must be 60 lbs of meat on their table). Obese Americans are a convenient target, but the scary truth— as the World Watch Institute has reported— is that world-wide, the numbers of overfed people are quickly on the rise.
Posted by Melanie Hopson at 4:31 PM No comments:
Email ThisBlogThis!Share to TwitterShare to FacebookShare to Pinterest
Labels: Books, Food, Poverty, Travel

What the World Eats- I

On one of my book shelves sits a photo-journalistic, coffee-table type of book titled Material World in which a photographer visited countries around the world and took photos of typical families with all of their worldly possessions laid out in front of their home dwellings. I've used that book for teaching classes on simplicity and I look at it often. 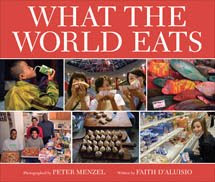 Shortly after my $1 a day experiment was finished I bought a similar book called What the World Eats. The same photographer traveled to over 20 countries and found a family that represented the average income for each particular country. He took a photo of each family in the place where they prepare and eat food, surrounded by a typical week’s worth of groceries.

Here is one of the families from the United States: 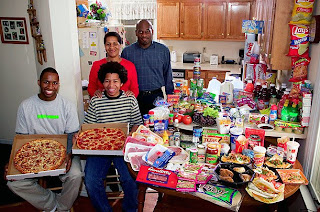 Here is the family from Chad: 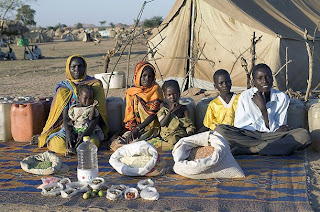 Here is the family from Mexico. I could sanctimoniously say that this book made me want to immediately get online and buy stock in Coca Cola (check out the back row of the photo above), but there is much more to this book than gawking at the photos and judging what the families eat. The book is a fascinating study of food, economics, cooking, survival, globalization, culture, tradition, health, and so much more.

With each photo of the family and their food, the author records how much money the family spends on food in one week (converted into U.S. dollars). I won’t list all 20-something of the countries, but here are some highlights:

o The French family (2 adults, 2 teens) spends $419.95 per week on food (with all of their sublime cheeses, mousses, cafés, and pastries I’m pretty sure that I’ve spent close to that in one week for myself in Paris)

o The Sudanese refugee family (1 adult, 5 kids) living in Chad spends $1.22 per week on food. Nope, that is not a typo. ONE DOLLAR AND TWENTY TWO CENTS!

For some reason, the authors photographed 3 families from the USA.
o The California family (2 adults, 2 kids) spends $159.18 per week on food.

o The North Carolina family spends double that at $341.98, but to be fair they have 2 teenage boys in the photo.

I've got much more to say about this book, but for now I am wondering how many of us would enjoy putting a week's worth of our eating habits on photo display? For the photo in my kitchen, I imagine a small castle made out of stacked pints of Ben & Jerry's icecream.
Posted by Melanie Hopson at 4:03 PM No comments:
Email ThisBlogThis!Share to TwitterShare to FacebookShare to Pinterest
Labels: Books, Food, Poverty, Travel
Newer Posts Older Posts Home
Subscribe to: Posts (Atom)