Haiti as a Blessing

Lately, in preparation for my Haiti trip I have been watching all the news specials and documentaries about Haiti that I can get my hands on. I recently watched a Frontline special about that state of Haiti one year after the 2010 earthquake.

A Haitian man named Daniel was interviewed. He is a successful businessman who is putting Haitians to work building a power plant in Port au Prince-- at high cost to himself and his family. As one of the “business elite” Daniel is a target. His wife was kidnapped by gangsters and held for 10 days while he paid three different ransoms. When she was finally released she was so traumatized that she moved to the United States with their kids. He stayed in Haiti.

A soft-spoken man of incredible faith, this is what he said:
“Coming from Haiti feels like a burden. It feels like a heavy cannon ball tied to your ankles. It feels like a curse, really. I used to really feel that. Until it occurred to me that living in Haiti was a blessing. It’s an opportunity to touch Christ every day. In the person who can’t feed himself. And the men in the prison. And the kids who contacted AIDS and don’t have access to medicine.”

That statement blew my socks off. This is exactly the type of attitude I am going to be on the lookout for while I am in Haiti.
Posted by Melanie Hopson at 7:20 AM No comments:
Email ThisBlogThis!Share to TwitterShare to FacebookShare to Pinterest
Labels: Poverty, Spirituality, Travel

Intentions for My Time in Haiti

One week from today I will be on a plane to Florida, and then on to Port au Prince.

This morning I'm reflecting on and listing my intentions for my time in Haiti:

Love, Grace, Compassion- be ALL about these things.

Look past the physical to the spiritual. See things through spiritual eyes.

Identify and celebrate pockets of hope. Find out how Haitians still manage to be hopeful.

Be encouraging. Smile often, praise people who have endured much and been at it for the long haul.

Listen intently to what the Haitians are saying and not saying.

Release my incorrect beliefs and myths about people living in poverty.

Say YES. Be game for anything. Try everything out.
Posted by Melanie Hopson at 9:00 AM 2 comments:
Email ThisBlogThis!Share to TwitterShare to FacebookShare to Pinterest
Labels: Travel

Pushing the treadmill speed up to 5.2, I stuffed the buds into my ears and blasted “I Gotta Feeling” on my iPod. Involuntary tears came to my eyes. What is that all about?, I wondered.

I had 40 minutes of treadmill time to figure it out, during which time I determined that I have a Pavlovian response to that song because of the YouTube video where the Black Eyed Peas surprised Oprah with a flash mob for her anniversary a couple of years back.


And I always get teary-eyed when I see a flash mob.

But I don’t get emotional for any old flash mob. I respond to the grand scale mobs—not the small, weak ones. The organizers of Oprah’s flash mob allege that 21,000 people learned the choreography. That qualifies as grand scale, my friend.

Secondly, I respond to the songs that they play. This flash mob in an American mall food court is fantastic, not because there is free advertising for Arby’s, Subway, and Panda Express, but because children, adults, and seniors were all blessed with the sounds of the sacred Hallelujah Chorus while spreading mustard on their corn dogs.


Lastly, location is important. I love this classic flash mob in the cavernous Antwerp train station where children and adults dance to “Do Re Mi’ from the Sound of Music.


A search on YouTube reveals that there were flash mob tributes to Michael Jackson in Paris, Cebu, Stockholm, Seattle, Bucharest, Montreal, London, San Francisco, and apparently every other major city in the world.

There are flash mobs that pay homage to Glee songs, and some enterprising advertisers—like T-Mobile-- are organizing flash mobs to draw attention to their products.

But why do I love flash mobs, and why do they invoke such an emotional, visceral response in me? Simply put, flash mobs represent everything that is good in the world.

They are a joyful celebration of life-- exciting and spontaneous. Flash mobs shine a spotlight on the arts— music and dance. They represent large-scale unity. Flash mobs require humans to cooperate with one another and they highlight the value of global community. They are a profound example of people peacefully working together, delighting others, calling attention to an issue, celebrating, and spreading good will and cheer. Flash mobs exult in turning ordinary places- a food court, public square, train station- into sacred space.

And most importantly, flash mobs represent a transcendent moment-- an “ascendancy of the soul” as Thomas Moore would write.

And if I can get all of that inspiration from just 40 sweaty minutes of blasting a mediocre band’s music through my iPod, then flash mobs are even more powerful than I thought.

Posted by Melanie Hopson at 1:49 PM No comments:
Email ThisBlogThis!Share to TwitterShare to FacebookShare to Pinterest
Labels: Events, Spirituality

An adventurer could buy a scuba diving package.

A romantic could enjoy a Las Vegas weekend vacation package at the Bellagio.

A boss could secure 4 chairs and a 36 inch round table “break room set”.

A computer geek could buy a Toshiba notebook.

A sports fan could purchase a Samsung 46” LCD HDTV.

A teenager living in Alberta could get a Canadian iPhone.

A driver could pay for a one month lease on a Mercedes. 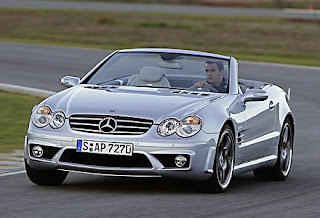 And they would be spending the same amount as the average annual income of a Haitian at the start of the cholera epidemic. $659.00
Posted by Melanie Hopson at 2:41 PM No comments:
Email ThisBlogThis!Share to TwitterShare to FacebookShare to Pinterest
Labels: Poverty

I popped a couple of Advil last night in a pre-emptive attempt to ward off some aches and pains this morning. My shoulders hurt from hauling 2 liter bags of mulch. My hands ache from grabbing handfuls of weeds. My arms hurt from digging and overturning soil in a planter. My knee hurts from kneeling down to pick up rocks, marbles, chunks of concrete, and chopped roots. My feet ache from countless trips to throw junk from the backyard into a dumpster in the front yard.

I have a sunburned face. I have scratches on my legs. I have bruises on my forearms. My clothes are covered with ground-in dirt. My shoes are spattered with rancid mud water and slug juice. Bees buzzed around my ears, my feet crunched countless snails, and spiders crawled across my shoes and up my socks.

And I couldn't be more satisfied.

Because yesterday, while working on a project for Rebuilding Together, my Tribe helped turn a family in need's backyard from this..... 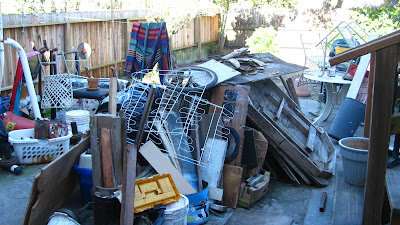 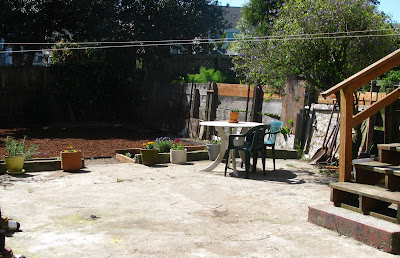 We also cleared and organized a garage that looked pretty much the same as the "before" backyard photo, and laid new linoleum in the hallway and kitchen. All things considered, a great way to spend a day.
Posted by Melanie Hopson at 8:04 AM No comments:
Email ThisBlogThis!Share to TwitterShare to FacebookShare to Pinterest
Labels: Events, San Francisco
Newer Posts Older Posts Home
Subscribe to: Posts (Atom)