Book Reflection: On That Day Everybody Ate 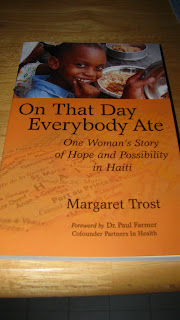 On that Day Everybody Ate, by Margaret Trost.

Ms. Trost’s story begins with a “reverse mission” trip to Haiti in which the goal of the hosting organization is for the participants to be transformed. She volunteered in a hospital and orphanage and observed first-hand the physical hunger that the Haitian people suffer and the spiritual satiety they posses. She returned to the U.S. so transformed that she recognized a series of events for what they were—a personal call to help feed the hungry children and adults in Haiti.

Partnering with a local Haitian Catholic church, she raised the money to start a feeding program that provided one hardy meal a week to 500 children—some of whom walked 5 miles to get that meal. Donations kept rolling in so she started a non profit—the What If? Foundation, based in Berkeley-- and they were soon feeding 1,000 people five days a week, as well as running a summer camp and sending some kids to school with scholarships.

All of this happened before this year’s earthquake in Haiti. Their kitchens in Haiti were miraculously spared severe earthquake damage, so in the aftermath of the disaster they are now serving about 2,000 meals a day.

All right then. Ever since 2008 when I read about Haitians eating “mud cookies” (made out of lard, salt, and dirt), Haiti has been in the back of my mind nagging at me like an item on my grocery list that I just can’t recollect. A logical next step would have been to go to Haiti earlier this year after the January 15th earthquake, but I feared that there was so much chaos in Haiti at that time that my trip and intentions would be wasted. I’m still waiting for my call to Haiti and it feels like I’m revving my engine at the red light, waiting for it to turn green so that I can peel out over the starting line.

Until I get that green light, I’m pondering some of the lessons from this book.

1) The reason Margaret Trost was on the original trip to Haiti in the first place was because her husband had unexpectedly died 18 months earlier. Her life as she knew it had ended, and she was ripe for a new beginning. Oftentimes something new doesn’t begin until we have experienced and honored an ending. I’m on the watch for endings in my life (jobs, relationships, interests, etc).

2) The Haitian women who partnered with Ms. Trost in the original once-a-week feeding were women who worked full-time jobs in addition to caring for their children. However, they still carved out time to go to the farmer’s market every Saturday morning, buying sackfuls of rice, beans and vegetables, then cooking all day and night Saturday, then serving 500 meals, and then finally cleaning up on Sunday after church. The author describes their joy as they sat in a circle peeling carrots, picking bugs and rocks out of the rice, cooking the meal with love and care. Where, oh where is my heart for service like that? I considered it a monumental sacrifice to dedicate two nights in a row recently to cooking a meal for the homeless one night, and serving it the next night.

3) I’m still trying to figure out what to do with mathematical and ethical incongruencies like that the money I spent on organic strawberries at the farmer’s market yesterday could feed 24 Haitian children their one meal of the week. Or that I have a cupboard full of pasta, beans, and sauces, and Haitian mothers are baking “mud cookies” in the sun to give their children something to fill their tummies.
Posted by Melanie Hopson at 8:39 PM 3 comments:
Email ThisBlogThis!Share to TwitterShare to FacebookShare to Pinterest
Labels: Books, Food, Poverty
Newer Posts Older Posts Home
Subscribe to: Posts (Atom)