Five years ago when I was getting ready to embark on a year long solo trek around the world, my therapist likened my time of packing and preparation to climbing the ladder to jump off a high dive.

Tomorrow I am flying off to Tanzania, Africa for 3 weeks. It doesn’t feel like I’m climbing the rungs to an Olympic size diving tower platform, but it’s no jump off the “low dive” at the community swimming pool either. In the Olympics, there is a diving board that is sized in-between the high dive and the 1 meter diving board.

It’s the 3 meter diving board.


I’m climbing that ladder as I prepare myself for Africa, and while I’m not freaking out (like I would with the high dive) I am well aware that I am willfully jumping into deep waters.

Those waters are teaming with some adorable little Nemo-style clownfish but also with some fearsome great white sharks. Traveling to Africa, I’m certain to dive into waters of uncertainty, inconvenience, fear, and frustration, but also into waters of mystery, knowledge, joy, experience, relationship, expectation, delight, and discovery.

Sure, I might belly flop. But given my genuine love for travel and adventure, I believe that in the end my trip to Africa will be judged as a perfect 10 swan dive with a splash-less finish.
Posted by Melanie Hopson at 11:12 AM 4 comments:
Email ThisBlogThis!Share to TwitterShare to FacebookShare to Pinterest
Labels: Travel

At the Academy of Sciences in San Francisco there is a tank in the aquarium where several amazing, other-worldly seahorses live. I’m fascinated by them. They move to and fro like a hot air balloon floating lazily over the Napa valley. So imagine the “ewwww” factor when I opened my book What the World Eats and saw a photo like this one:

Now don’t get me wrong- I am completely on board with the street vendor idea. Four and five star restaurants are fine and dandy, but for my money some of the best food in the world is bought on city streets. Cases in point:

• on a cobblestone street corner in Bratislava, Slovakia, a man sold me a rolled up cone of newspaper that held a dozen or so chestnuts that he had just roasted on his cart.
• in the Philippines, I snacked on delicious strips of grilled chicken on sticks.
• in Maui, teenagers standing under coconut trees sold me chilled chunks of mango and pineapple out of an ice chest.
• in Bangkok, virtually every square foot of sidewalk space was claimed by food vendors setting up mini-kitchens from their carts and the aromas of the satays, curries, and various noodle soups fought a losing battle to overcome the odor of automobile exhaust.
• just last December I gamely embraced the New York ritual of buying a basic but adequate hot dog from a street vendor near Rockefeller Center.

Street food. Most City dwellers have noshed a taco or burrito from one of San Francisco’s many taco trucks. And those of us who have frequented Zeitgeist or other bars know that the Tamale Lady makes tamales so good they bring a tear to your eye. But I’ve been reading in the newspaper that the crappy economy has birthed a new breed of vendors roaming our city streets. 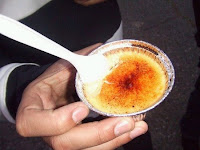 At 24th and Mission, “Murat the Muffin Man” sells strawberry tarts, zucchini muffins, and chai tea for $1. Peddling his cuisine in Dolores Park is “Curtis the Crème Brulee Guy” who skillfully finishes off the carmelized sugar with his blowtorch.

The Department of Public Health may be getting nervous about these culinary entrepreneurs, but I think it is a good thing to have them around. And if I find out that there is a street vendor in Chinatown who is selling seahorses on a stick, with a lot of prodding I just may go ahead and give it a taste. And to assuage my guilt, I will immediately make a donation designated to the seahorse exhibit at the Academy of Sciences.
Posted by Melanie Hopson at 8:10 PM 1 comment:
Email ThisBlogThis!Share to TwitterShare to FacebookShare to Pinterest
Labels: Food, Travel 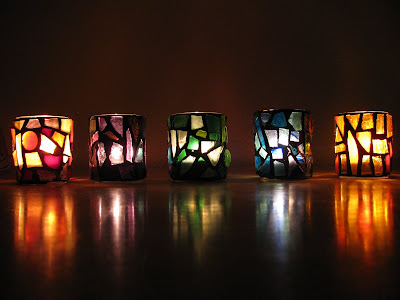 The brown stain of the wooden pews grows darker as the last rays of sunlight take leave from the chapel’s stained glass windows. Flames in the votive candles cast an amber glow upon the faces of the faithful sitting cross-legged on the floor. The flickering lights make the chandeliers dance in shadows upon the walls.

The high-pitched soprano plays piano and leads our singing while an octogenarian plays capable violin by her side. There is repetitive, meditative singing and the offering up of prayers. Some prayers are shared from shy, quaky voices, and some prayers emitted from strong, sure speech. There is more singing with the sopranos, altos, tenors, and basses finding their respective parts. As the final notes of the four part harmony are held and dissipated, we enter an observance of silence. Two hundred people in one room attempt to be still in body and in spirit for five……eternal……. minutes.

Someone sniffles in the corner. A woman stifles a sneeze. A man shifts in his seat and the pew creaks. A man clears his throat. A cell phone vibrates. We wait for the silence. Another man clears his throat. A knee thuds against a pew. A woman scratches her head. Someone coughs. A latecomer enters the chapel and steps on a squeaky floorboard. More coughing, shifting, thudding, clearing, scratching, sniffling, creaking, bumping.

Then miraculously, all two hundred of us ease into the silence like a newborn being lowered into a warm bath. For eight, maybe ten seconds the silence is attained. I feel a sensation like a heated palm massaging a small circle in-between my shoulder blades. There is a gentle beating in my chest. My heart feels suspended, light, floating and expecting. Silence. A transcendent moment.
Posted by Melanie Hopson at 10:36 PM No comments:
Email ThisBlogThis!Share to TwitterShare to FacebookShare to Pinterest
Labels: Events, Spirituality

What the World Eats- III

If you ever get to view this book you will observe that families from many of the poorer countries have a bonanza of food laid out in their kitchens and food prep areas. The main difference between their piles of food and other family’s piles is that their diet consists mainly of fresh fruit and vegetables, much of which they grow themselves.

Look at the food for this Ecuadorian family—plantains with every meal!

This reminds me of Michael Pollan’s wise little phrase:

Eat food.
Not too much.
Mostly plants.


I enjoyed reading some of the more exotic recipes offered up by many of the families.

The mother from Chad makes a daily breakfast soup by throwing a handful of dried tomatoes into some water and salt. I figure it’s probably healthier than Frosted Flakes or Pop Tarts for breakfast.

From Greenland there is a family recipe for Seal Stew, which will come in mighty handy should I ever get famished and want to club a baby harp seal.


Lastly, here are some of the more interesting foods and drinks ingested by families in different countries:
o The family from China lists MSG, a flavor enhancer, as a regular condiment in their meals. I thought MSG was only for places like Panda Express.

o The family from Greenland lists walrus and polar bear as regular meats they enjoy. Any animal that stars in a children’s cartoon is questionable in my book.

o The family from Japan eats an average of 12 different kinds of fish and shellfish, and 3 varieties of seaweed each week. I don’t think American supermarkets even sell 12 kinds of fish.

o Mexico ranks 1st in the world for per-person consumption of Coca-Cola. Considering how miserably sick I’ve gotten from Mexican water in the past, I would brush my teeth with Coca-Cola if I had to.
Posted by Melanie Hopson at 5:56 PM 3 comments:
Email ThisBlogThis!Share to TwitterShare to FacebookShare to Pinterest
Labels: Books, Food, Poverty, Travel
Newer Posts Older Posts Home
Subscribe to: Posts (Atom)