Occupy SF- Who Was There

Young men wearing flannel shirts and dark hoodies sat on their skateboards in a circle on the lawn in the middle of camp.

TV reporters pointed cameras and shoved microphones into the faces of the weirdest people they could find and prompted them to say inevitably outrageous things. 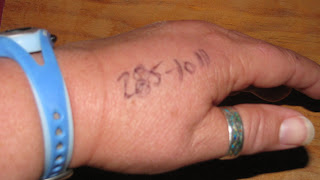 Legal volunteers wandered the camp making sure everyone had the phone number of the legal hotline. I scribbled the number on my hand just in case the police rushed in and I got swept up with the people being arrested.

A pack of drag queens sashayed by lisping “drag queens for social justice”.

An enthusiastic guitar and mandolin duo entertained the crowd by singing “All you fascists are bound to lose!” to a cheerful melody.

Former City Supervisor Aaron Peskin sat on the ground linking arms with others who were willing to get arrested tonight. Mayoral candidates Leland Yee and John Avalos were also present, often with digital recorders shoved in their faces seeking saucy sound bytes.

Gray-haired Boomers wearing Land’s End fleece jackets marched in a circle and reminisced about past marches, actions, and demonstrations.

Drunken homeless people plopped down to sleep smack-dab in the middle of all the milling crowds, probably wondering what the hell all the noise was about.

Canine occupiers were well represented. Two puppies wrestled in the center of camp, and on the outskirts a kitten on a leash ignored the action long enough to lick herself a nice bath.

We were instructed that if you were willing to get arrested tonight you should be a part of the first row sitting in front of the camp. Those who weren’t willing to get arrested were instructed to stand on the sidewalks on the sides of the camp and alternate between two chants: “The-whole-world-is-watching” and “They-may-be-violent-but-we-are-nonviolent”. And as a final instruction, the activists told us “the police will succeed if they raid the camp tonight. So when we are dispersed, reconvene tomorrow at noon in front of 101 Market Street.”

There’s a lot of smart, brave, committed people at that camp. I’m going to bed hoping that my prayers made a difference for those who may be arrested or injured tonight. 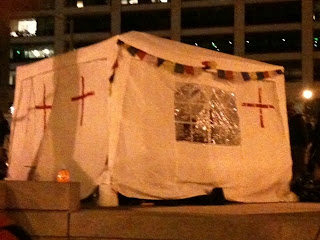 Posted by Melanie Hopson at 12:45 AM
Email ThisBlogThis!Share to TwitterShare to FacebookShare to Pinterest
Labels: activism, San Francisco